Las Fallas is Valencia's principal fiesta. Its climax is the celebration of St Joseph's Day. It begins on March 1st with 19 days of Las Mascletas, a celebration of noise. Teams compete to put on the most impressive aural display of pyrotechnics, staged in the Plaza del Ayuntamiento [City Hall Square] in the city centre. Strings of firecrackers and explosives [of industrial/military grade] are arranged on the central area of the square, linked by fuses. The sequence ends, for every team, with a thunderous, rolling hurricane of sound. The city centre fills with smoke. It starts promptly at 2pm, lasts 10 minutes: huge crowds attend every day. As the echoes die away and the smoke drifts off, the crowds make for the tableaux which form the principal element of Las Fallas.

Fallas clubs work all year round to fund and build their tableaux. Placed in plazas and street intersections in the various barrios of the city centre, the tableaux are made up of figures, ninots in Valenciano, constructed with superb craftsmanship on a gigantic scale, illustrating a theme or several themes of modern life, from politics to parking problems. Satire plays a prominent part. The tableaux completely fill the squares or intersection they are placed in. Most are up to three stories high. The size, execution and complexity are astonishing.

Coincidentally I write on the day that the Spanish Government is exhuming the body of the fascist dictator Fransisco Franco, here featured in a particularly political tableau. In this case it is the leader of the hard left Podemos party, Pablo Iglesias, with the shovel.

The origins and history of las Fallas is well described here https://www.donquijote.org/spanish-culture/holidays/fallas/ 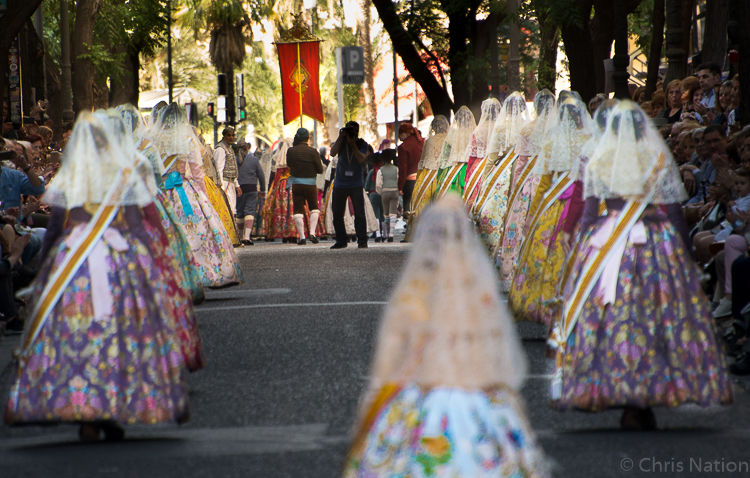